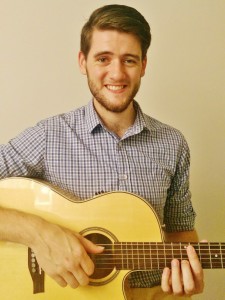 Andrew is a contemporary guitarist, instructor and composer. He began teaching guitar in 2008 and holds an Advanced Diploma in Music and a Bachelor of Music from his studies at NMIT, as well as a Graduate Diploma of Teaching from Melbourne University and is currently undertaking his Masters of Teaching at Melbourne University. Andrew is also a registered teacher with the Australian Guild of Music.

As a teacher Andrew is a passionate believer in developing correct technique as well as a regular practice routine to best equip students for any challenges they might face in music. “It is also important to introduce students to music they may not have heard otherwise, and help foster an interest in new music. Good music tuition sees students' musical horizons broaden.”

As a guitarist, Andrew can be seen performing a wide variety of styles in the contemporary idiom. Andrew spent the first half of 2014 touring Australia with folk act Paul Reid on electric guitar and banjo. Andrew has been involved in various ensembles as a performer and band leader, from Middle Eastern Maqam ensembles to Jazz quartets, from Rock bands to Brazillian Samba groups.